I confess: I have fallen in love with Languedoc-Roussillon. Because of the region, its climate and its spectacular scenery. Because of the increasingly excellent wines that are being produced there. And maybe its status of underdog and its (former) bad reputation as an uninteresting, bulk-producing region also have to do something with it; when we think French fine wine, we think Bordeaux, Bourgogne, Champagne, Loire, and perhaps Rhône and Alsace, but rarely will Languedoc pop up in that list (at least when drawn up by outsiders).

The region is, alas, not doing itself a favour by creating or maintaining an AOP system that takes quite some time to be understood. The Languedoc system does however bear some resemblance to the Côtes-du-Rhône-Villages, in the sense that there is a generic appellation  (AOP Languedoc, formerly “Coteaux du Languedoc”) valid across the region (not the Roussillon), with some villages or zones allowed to add their name (e.g. AOP Languedoc – Grès de Montpellier), and some that have become a “cru” in their own right. A recent and very good example of this last category is “Terrasses du Larzac”, which brings me to the topic of this post.

Terrasses du Larzac is at the Western edge of Languedoc, away from the hot coastal plains where the focus is on volume, at quite high altitude (up to 800m) and with a mix of red clay (“ruffe”) and limestone soils. Its climate is more continental (being further away from the sea), and the average annual rainfall is slightly higher here. The height brings wide diurnal temperature ranges and cool nights, ideal for a slow and long maturation. Terrasses du Larzac has become one of the most sought-after AOPs in the Languedoc. 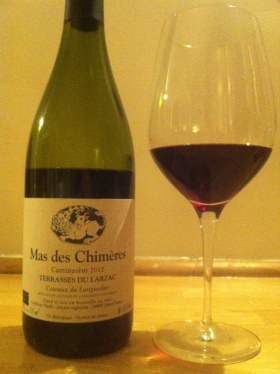 The wine discussed here comes from the Mas des Chimères, situated in Octon, close to the lake of Salagou. The estated is certified organic, and produces a range of wines from IGP level up to AOP Terrasses du Larzac.

This “Caminarem” is composed of fairly equal shares of carignan, cinsault, grenache, syrah and mourvèdre. It is still fairly young (vintage 2012), and upon opening appears quite disjointed. There is some very nice fruit and garrigue spice there to be sure, and the alcohol (13,5%)  is well balanced, but somehow it seems to lack integration. What a marvellous surprise on the second day, when everything has fallen into its place: the wine has unleashed its full garrigue bouquet of lavender, laurel and thyme, alongside juicy dark cherry fruit and some licorice. Its tannins are mature and very fine-grained, with just a little savoury bitterness in the finish. It lingers on for a long time. A delight to drink now, but those who wait for it a few more years will undoubtedly be rewarded. I’m getting a few more bottles, in any case.

Sold at a price of 13€ by Passion for Wine, Place Colignon, 1030 Schaerbeek (new discovery, recommended! sells a range of organic and biodynamic wines from France, Spain and Italy)